“For days I had to bum others to open my food, when someone took petty on me and tossed me a P38 it went on my dog tags. I have lost a lot of things over the years but not my P38.” – A WWII vet.

P38 The most perfectly designed tool in history opens stories of the past:

The cylindrical tin cans we know so well truly did not become a popular way of marketing food until WWII. In fact, in 1939 there were only 2 recipes for canned meat tested by the military. Canned field rations when first issued were opened with bayonets. 1,500,000 rations were initiated in August 1941 and soon it was found that bayonets were better at cutting men than opening C-Rations. Men needed something designed for opening cans.

Invented in the summer of 1942 by Maj. Thomas Dennehy; designed simply as a one use can opener to be issued with C rations for feeding our troops but it became a trusted universal tool.

Starting in 1942, the P-38 opened C-Rations for 3 Wars, any time our government sent out C- Rations be-it fighting fires or feeding people displaced by disaster the P-38 was there. It was an “unofficial must have “in the Boy Scouts and it has always been looked at as a way of separating the prepared from the not. 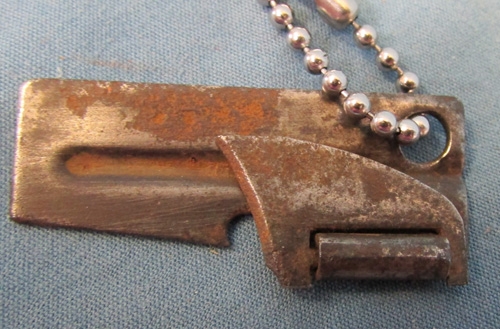 My first was 1960’s GI issue, a gift from a mentor, and still in the original oil paper wrapper as how they were issued with c-rations. I had it for more than 30 years until my set of keys were lost. My next was Canadian made and has been with me for more than 15 years.

For many, seeing a P38 bring back memories, opening conversations, making connections across generations, therefore opening doors not just cans.

Over the past few years, I have given out P38s to strangers just to open up conversations, maybe that is why you are here right now. I have heard many great stories from my Alzheimer’s and Hospice patients, from all the wars, from soldiers, from their wives, and kids. I have heard great stories from wilderness firefighters, from former Boy and Girl Scouts. This little gift has brought up stories of laughter, fondness, and grief, stories I want to start recording.

As I write this I am in a hotel room on a road trip opening doors for our students. Last night we were waiting to be seated at Anderson’s Split Pea Soup Restaurant. At a table, not more than 2 strides from me was an elderly gentleman with a WWII Vet hat on. I stepped past the hostess and told the old soldier I had a gift for him, he opened his hand and I placed the little assembly of 2 stamped pieces of thin steal in the palm of his hand. He traced the little tool with his weathered fragile shacking index finger. Slowing and Softly still looking in his hand he said: “That’s a P 38” he looked up with tears in his eyes and took both of my hands in his and said, “Thank you Sir.” he was very moved by this gift from a stranger. But that is not the end of the story, The hostess asked what I gave the gentleman, so I put one in her hand and she told me her husband was a vet and he used to carry one until he passed, as we were talking walking with her to our table a dad commented about the P38 in her hand so I gave him one and he told me his father had given him one in 64.

As Toni and I ate dinner the dad and his teenaged daughter were chatting about the can opener, across the room the old solder and his family were talking with him as he was holding the P38 and occasionally wiping his eyes, and the hostess was sharing a story with a young lady, pointing to her P38 on the table, I wish I could have heard these stories being told. Stories a room apart and generations apart.

In time the dad walked over to us and asked me if I could give one to his daughter. He told me she was too shy to ask her self. In time she stepped over to me and apologized for being shy and thanked me for P38.

It made me feel good that this gift that costs less than a candy bar opened up a conversation between a dad and his daughter and her getting out of her comfort and talk to a stranger.

One of My Own P38 Stories

In the early 90’s I was 4 wheeling with a minister returning from a day of backcountry skiing. It was springtime and the creeks that I needed to cross were just a bit more swollen from the snow melt than they had been the week before. At one crossing the fan on the engine just touched the water and blowing it back onto and into the distributor stalling the engine. We were not quite to dry ground and the snow melt water quickly rose through the drain holes in the jeep. The minister sat with his feet on the seat and his arms around his legs, his eyes closed, and he was mumbling something under his breath, I assumed he was talking to God. I was not sure what act of god we were going to get. We had been praying for rain and snow for months, I could just imagine our maker laughing saying, “Careful what you ask for.” I did not think God was going to reverse my bad choice from 3 minutes earlier, nor was he going to change any of the laws of physics that I had been teaching my college students about electricity following the path of least resistance. The best we could hope for was him to give me clarity of thought. I had taught 3 years of auto shop in the mid-80s and I had all the tools I needed were at my fingertips. The front wheels were only a 2 or 3 yards from being out of the water. I put the transfer case in low range, put the transmission into first gear and used the starter to cracked us to a point of the front tires being on dry ground. With the rear wheels in the creek and the floor of the jeep underwater, I pulled my keys from the ignition and climbed over the windshield, using my old P38 I popped the distributor cap off and wiped it out with my dry tee-shirt. Back in the driver’s seat, the engine started as though there was never a problem and we were back on the trail. Father Mark asked me what I did? I held up my P-38 and said, “It opens more than cans.”

A few days later the paster was introducing me to some of his friends telling them with great enthusiasm, “We were deep in the backcountry in the middle of a rushing river, the jeep stalled, I thought we were going to be washed down the river.” He told them, “I knew it would take months for anyone to find our desiccating bloated bodies, food for the carrion feeder. All I could do was pray to Our Heavenly Father. With no more than an army surplus can opener and the shirt on his back, Brian was able to fix the jeep and we were back on dry ground.”

Where are All Those P38s

Of the thousand or so P38s I have given out it is safe to say that many are in kitchen junk drawers to be forgotten, some will be used to open cans camping or when the electricity goes out, but I know many are carried every day and are the spark for stories of the past being told. 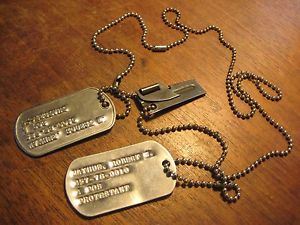 "The enemy is anybody who's going to get you killed, no matter which side he is on."
—Joseph Heller,

"You don't drown by falling in the water; you drown by staying there."
—Edwin Louis Cole