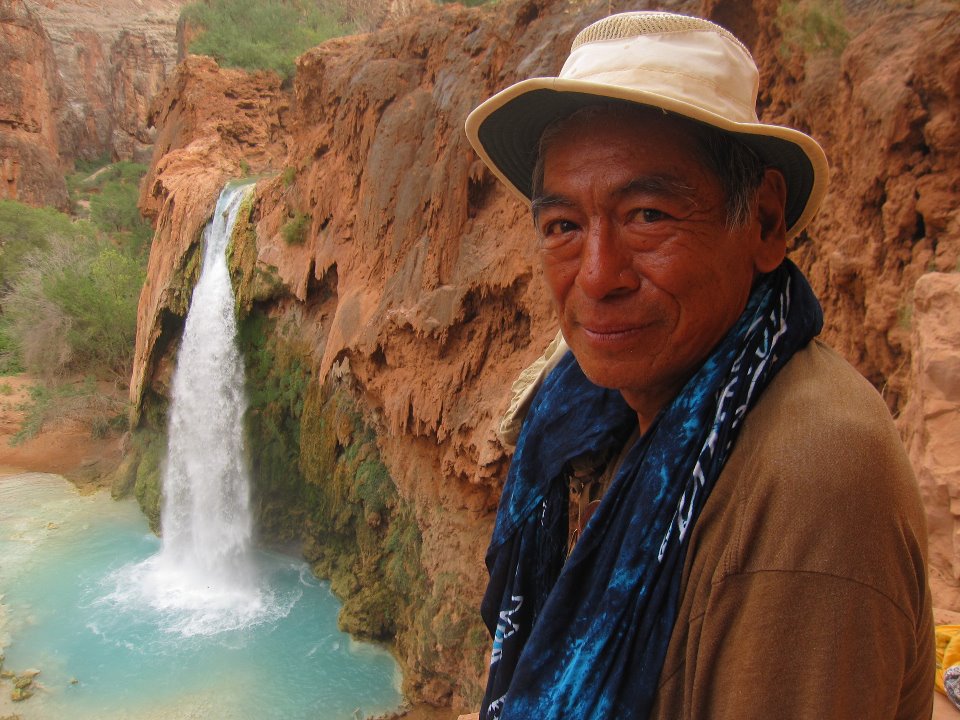 As a young boy, I spent some of my summers at my grandmothers home. Grace Chapella was a potter who lived on the Hopi reservation, located in Northern Arizona, USA.

My fondest memories were of those times with her, especially when we were alone. If I was lucky I got to stay all summer with her. Sometimes it was just for a couple weeks. I cherished every minute.

She was a very wonderful woman; I do believe that she too enjoyed my time with her. A lot of that time was spent in her pottery shack, in the summer the door was left open, in winter it was warmed by a black potbelly stove, heated by cedar and coal. She would take me back into our history while she had me break rock hard clay into smaller pieces..she would the then grind into flour, so she could add water. I was given a very important job she’d tell me.

I’m gonna tell you of the mornings we spent during that time. Early in the mornings, Sahya, grandma, would wake me up while the rest of the family slept. Quietly she would help dress me than taking me by the hand out of the room. The room was a large living room that served at night as the family bedroom. We had a closet where we stored our bedding in the day. Back then we didn’t have much furnishings “cause you should be outside working instead of inside sitting” I could smell the coffee before we entered her kitchen. She’d pour the coffee and sit down and spreading homemade jam on the bread she had baked. It made me feel like a man. She was so quiet during that time, we’d sit there drinking coffee, I’d be looking at her big hands, strong hands they to seemed to move slowly. You know, I’ve seen those hands pull off cedar branches, then pull it apart even more by the grain of the wood! Then, later in the day, those same hands would shape her beautiful pottery.

Years later, I wrote a poem titled, Dream Fingers, your creation I be. It was her hands I wrote about. So there we would sit. She always called me son. She made my name sound so special around the others it was, John. Knowing my curiosity, she’d smile and start telling me a story of how we Tewas got to Hopi. My Sahya was the clan grandmother of the Bear clan. Some stories would be of her personal experiences, or myths and at times prophecy!

As years passed those mornings stories came to pass in my life and the earth”s. I’ll write later of some of those stories. She lived in a small part of our culture, but she thought of all mankind. I personally never heard speak unkindly of anyone. She was the grandma of the world I thought. As she would start telling a story, I could see the story come alive in her eyes and on her face. Her eyes would become distant she’d disappear in them and so real it became like I wasn’t even there. She’d paint a picture that I got to watch. It was kinda like watching TV, only you could see and feel the elements come alive in them. You could smell them too. Some stories made her wept softly, especially when she had something important to tell me. “I shouldn’t tell you this,” she’d say or “I don’t know why but you need to know this. They will keep you strong, you need to know who you are. Your Tewa!” As she would gently pat her left hand on her heart. In our culture, the men become members of their mothers’ clan, who in my case was Sun. Bear she would say proud and strong yet softly spoken. Her eyes would tell me never to forget it.

Those early mornings would become my adventures, my life, my TV. While making breakfast, she’d ask me what I was going to do today. There were many chores to do, chopping weeds cleaning her yard, watering her fruit trees and getting water from a well about half a mile from the house..I’ve carried a lot of buckets on that chore. It would make her happy to see us working.

Breakfast made my meal would be placed on the table..knowing as I ate the storytime was coming to a close. On full moon mornings we’d be outside before coffee and all. I’d stand with her facing east. Breath in the air and smell the day it was cold but I’d take a deep breath, she’d say it will keep you handsome and make you strong. Cold, knowing the coffee would be warming me shortly. Those full moon mornings were mysterious, I would feel spirits in the air. The blue tint of the moon covered the land as far as I could see. From the homes surrounding her house, I could see tall blue columns of blue smoke fishing from the homes. The smell of cedar hung heavily in the air It reminded me of cotton strings connecting our earthly homes to our heavenly place, Star Children, like the cedar I hung on to every word. I’d open my senses to take in the moment, to be present. “Right now is all we have, enjoy it don’t waste your time being mad or angry. Be nice, don’t quarrel. Be brothers and sisters.”

I try and live those moments every morning. I’m Bear Sayha..it’s taken a while but I heard you. I love you Sayha, always have and always will.

"My brother and I have been coming to their camps since we were little. They have all been great, we never know what to expect, each one is always better than the one before."
—Kobe age 15

"Look deep into nature, and then you will understand everything better."
—Albert Einstein

"Nature is a profoundly deep part of us. Our species has spent 99.9% of the past 200,000 years thriving in nature, building shelter, making clothing, making fire, finding drinking water, tracking and harvesting food. For our species survival we had to be deeply connected to nature."
—Brian King