“A preteen shooting squirrels is a beautiful act; the act controls a vector of disease and a destroyer of property, feed, and food; the bullet brings a humane instantaneous death, no poison is introduced into the habitat of raptors; the child learns lessons that cannot be taught from any book or lecture.” - Brian King M.S. 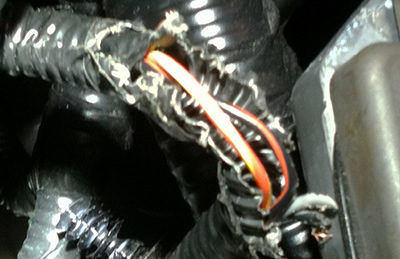 A Great Chore for the Preteen is Huning Ground Squirrels, Which Can Be a Big Problem

The California ground squirrel (Spermophilus beecheyi) has posed a problem for California’s agriculture industry, homeowners and health, since man started storing grain or growing crops. Ground squirrels damage food crops by consuming them in the field or caching these resources for later use. Their burrow systems present infrastructure problems, weaken terraces, levees, and dams; contribute to erosion and create hazards to livestock. The tailings from the tunnels from a single network can destroy 100s of square feet of crop. They will nest in an engine compartment chewing up wiring, belts, fuel line, and plastic parts, and pack debris so tight that the engine will not turn over. The California ground squirrel is a known vector of various human diseases including bubonic plague. At times predators cannot keep up with population spikes.

At times predators cannot keep up with population spikes. It is interesting to note that snakes will feed on the young but the adults are not only good at avoiding being a meal by use of extreme speed and acrobatics, but use shed snakeskin to camouflage their scent, use the heat of their blood engorged tail to confuse the heat-sensing pit viper rattlesnake, and are aggressive to snakes including gopher and rattlesnakes.

Some populations of ground squirrel have immunities to rattlesnake venom. To check population municipalities resort to poisoning which can harm non-target species like hawks, foxes, snakes, and pets. When I was a child our family dog died from eating squirrels that had feed at a county set bait station. I contend that hunting ground squirrels is a safe way to selectively lower this rodent population while sharpening developing hunting skills in a preteen.

When I was a kid, ground squirrel populations were high and my old .22 rifle and I were responsible for keeping the numbers around our garden and orchard somewhat in check. The squirrels were wary of me and the slightest noise would send them running for cover. The squirrels taught me to be stealthy and patient. I used open sights on that little kill zone, I tended to shoot from about 35 yards which sharpened my shooting skills. It taught me good breath control and good form. The California ground squirrel is classified by California Department of Fish and Game as a none game spices and can be hunted year round with no bag or possession limits, so I was able to get a lot of hunting in, which translates into being a better hunter when it comes to pig and deer. At age 11 coming up to the house with 3 squirrels made me swell with pride.

I now hunt ground squirrels with a bow or a .17 HMR. The .17 HMR has a flatter trajectory can reach out much farther than the .22 LR, lead-free ammo is available, and most importantly will not ricochet when hitting anything hard, the bullet just turns into copper foil.

When filming the documentary An Acquired Taste I took two teen boys out ground squirrel hunting, it was their first hunt after getting their license. These boys were preparing for doing a pig hunt and a deer hunt. It was a win, the boys had a great time, had some great experience, only took 2 hours out of our day, and there are fewer ground squirrels doing damage on the farm. One of the boys cleaned and cooked the squirrels on an open fire, and is tanned the tough little hide so little was wasted. Dressing the animal also give the young hunter experience field dressing as well as seeing how the bullet does its job. It also gave the young hunter incentive to aim for the vital organs, which will carry over in the big game hunt.

So get out and take a kid hunting, they will remember that time long after you are gone. 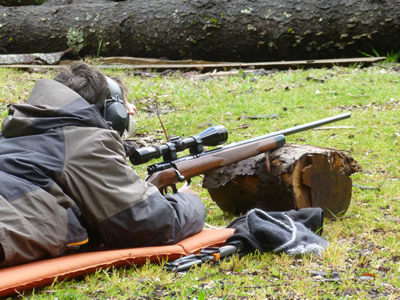 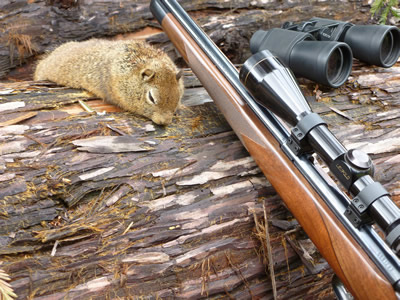 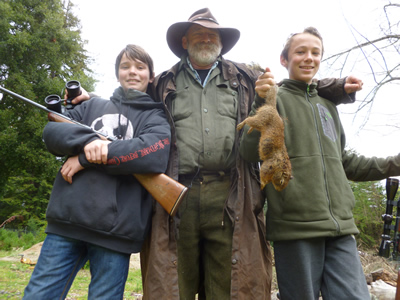 “It was my first hunt, and I was so excited my hands were shaking but my shot still went through the heart.” 13-year-old Alex

"When we poison a squirrel we may affect other animals on the landscape. Hawks and owls, fox and marten may die from eating the dead or dying rodent. When we hunt or trap the animal does not suffer, the animal is not wasted, and poisons are introduced into the habitat. "
—Brian King