“Soil erosion is as old as agriculture. It began when the first heavy rain struck the first furrow turned by a crude implement of tillage in the hands of prehistoric man. It has been going on ever since, wherever man’s culture of the earth has bared the soil to rain and wind.” — Albert Howard

There is a Pragmatic Reason Trees Lose Their Leaves

When the Fall Equinox has come and gone, there will be a chill in the morning breeze, and the leaves on the maples, sycamores, and dogwoods will changed to fall colors to tell us winter is around the corner and the trees are starting to prepare for the cold winter and the rain and runoff of winter and spring. With many things in nature if it is brightly colored it is most likely poisonous, fall leaves are an example, cyanide (prussic acid) and tannic acid increases, the result is the leaves that fall are not a food larder to animals but remain to blanket and protect the soil that is so important to the trees. You may notice that pine and redwood forests are on slopes where rain may be year-round or the snow melts late into the summer. You will also notice that the pines and redwoods lose their leaves year round. One reason is because they need to renew the duff year round to protect the soil. On those first few hikes of spring, you will plainly see how the winter duff protected the soil of the forest, but it also protected the fish in the streams and the water in the aquifer. 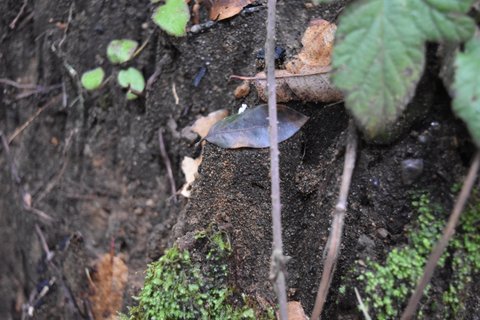 Where There is No Duff Soil Will be Lost

After the first strong wind after the fall chill, the trails are magically buried under the beauty of the reds, yellows, oranges, and browns of the fall leaves. But soon the leaf will be pulverized under the hiking boot on this popular trail and will soon be laid bare. The cyanide and tannins have no effect on their boots.

As a single raindrop from the first rains fall it strikes the bare soil with enough force to displace even the most hard packed clay and sand, a fine loaming soil has no chance to stay intact. The raindrop went from pristine and clear to gritty and brown, now on the ground, it will be joined with other raindrops, it starts its journey to the ocean.

On the bare soil, there is no resistance, the rain quickly forms seemingly unnoticeable tiny little riverlets scouring the soil. In less than a mile on this moderately graded trail, it becomes a brown creek where there had not been a creek before. The muddy water on the trail from the parking lot at the trailhead now carrying along with silt is sand. As the muddy water rushes downhill it scours the trail picking up more speed and sand on its path as it digs a trench down the center of the trail. It follows the path of least resistance and follows a steep shortcut to the creek that many unknowing or uncaring hikers have taken and makes a deep scar through the riparian. From my usual sit-spot on the far side of the creek, I can see where brown water meets the clear water of Fall Creek to choke the fish. In just one season eighteen inches of soil was eroded from under a tree that the trail has grown to surround roots exposed well above the now surface of the trail and tons of soil made its way into the coho spawning beds.

Slow it Down, Spread it Out, and Soak it In

We know that 18 inches were eroded because at the edge of the trail a single leaf is perched on spire 18 inches tall. If I made horizontal slices of that spire I would have perfectly shaped clay models of that single tan oak leaf. Just two-feet from that leaf is the start of a blanket of leaves commonly called duff. It is a vast blanket of duff under this second growth forest, though a steeper slope. Even in the heaviest of rains, we have seen in the six rainy seasons we have spent under those redwoods we have not seen runoff on the forest floor where duff is intack.

“Slow it Down, Spread it Out, and Soak it In” is a mantra that is taught to our students of all ages, and because our students are in the forest rain or shine they see that runoff only occurs where there is no accumulation of leaves. They not only learn too that it stops erosion but they repair it when they see it and move branches around to discourage people from continuing to cut the trails. Our students learn that trails are best built when the duff does not wash off because the grade is too steep. On private land, our students will go to great work to build trails with switchbacks following the US Department of Forestry handbook on building trails and then block off and repair where steep trails were causing erosion.

The trees by dropping their leaves not only prevents erosion by slowing the rain down and spreading it out but assures the water will soak into the soil around the drip line of the trees where it will be stored and available when needed. The duff over thousands of years has protected and fed the fungis, worms, insects, and mammals all have made tiny pores to tunnel in the soil under the forest floor. As the water percolates down it also brings with it the nutrients that are on the surface, the casting (worm poo), frass (insect poo), scat (mammal poo), the decaying dead of plants and animals to be filled by the root hairs of the trees, mycelium of the fungus, and the clay of the soil all there for the benefit of the tree and a lot left over for other plants and animals. It has been said those species that do the most good for the most species are those most rewarded. Once the soil has become saturated the excess water will continue to be filtered through the soil until it reaches the aquifer.

This banking of the water assures that the springs will flow, wells will continue to have potable water and the creeks will have a steady flow throughout the year that will benefit the coho salmon and the rest of the animals in the creeks and rivers.

As you look to rake the leaves of the trees or you are taking a short-cut on the trail you might want to remember that the tree worked hard to lay down that blanket of duff for a good reason.

"When the last tree is cut, the last fish is caught, and the last river is polluted; when to breathe the air is sickening, you will realize, too late, that wealth is not in bank accounts and that you can't eat money."
—Alanis Obomsawin

"The main characteristic of Nature's farming can therefore be summed up in a few words. Mother earth never attempts to farm without live stock; she always raises mixed crops; great pains are taken to preserve the soil and to prevent erosion; the mixed vegetable and animal wastes are converted into humus; there is no waste; the processes of growth and the processes of decay balance one another; ample provision is made to maintain large reserves of fertility; the greatest care is taken to store the rainfall; both plants and animals are left to protect themselves against disease."
—Wendell Berry